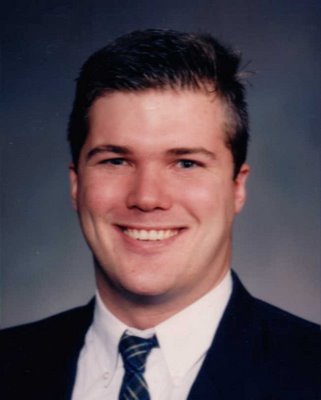 I joined the 2996 project to pay tribute to one of the victims of 9/11 and honor his memory. I was assigned Michael Horn, aged 27. Little did I know how much this young man would become someone I would like to have called my friend. I did some research and googled and yahooed and scoured the internet for information about this new acquaintance of mine. True, I never "knew" him, but through the tributes posted at various sites around the net dedicated to the victims of that horrid day, I got to know about him and what he meant to those around him.

I learned that Mike was born on December 27, 1973. He lived in Lynbrook, New York and had wonderful parents, two sisters, Christine and Maureen, and an older brother, Charles. He was employed at Cantor Fitzgerald as a Software Support Technician. His office was on the 104th Floor of the North Tower. He attended Chaminade High School in Mineola, NY, where he ran track and excelled at wrestling, and went on to SUNY-Binghamton, studying History. He was a member of Chi Phi fraternity. After graduation, he traveled through Europe, especially Ireland, where he had family. He loved to camp and ski and loved the outdoors.

Those were the easy things to learn about him, but I still didn't know him. What kind of person was he? I found that he was serious, sometimes; loyal, always; jokester, most definitely. His brother, Charles told the New York Times that "he wanted to enjoy life...he was a good guy with a great heart." His sister, Maureen, e-mailed and said he was a "hilarious guy with an incredible spirit."

In Newsday he was honored as a "young technician with the gift of gab." He was renowned for telling stories and could always entertain a room full of people with his latest adventures. His friends still tell stories of his adventures, and those adventures usually involve minor mischiefs and major amounts of hilarity.

Mike was charismatic and attracted friends like bees to honey. Although he was still in high school, he was actually included in the 1993 Lehigh College yearbook. He hung out there with friends so often that the yearbook staff thought he attended school there, too! He left amusing phone messages - singing some little ditty he had written or trying on one of several accents he liked to use.

One Friday afternoon in high school, he got an itch to go to the beach - in South Carolina! He roped in his brother, Charles, and, twelve hours later, they were frolicking in the surf. Both made it home safely and in time for school Monday morning. Once while in Ireland, he called a friend who agreed to have a "quick" drink at the local pub as he was due to move that night. Midday the next day, the friend still had not moved; he had spent the night being regaled with stories that made the evening and the pints disappear. Mike could charm even the best Irish lads. And why not? He was the quintessential Irish-American.

He was generous and always ready to help a friend. He was an avid outdoorsman and always involved in sports. Anytime Mike went out, there were at least ten people in tow and ready for whatever adventure they could concoct. He was very close to his family, and his brother says that had Mike had his way "my mother would have been canonized." Mike was just settling into adulthood when the attacks came.

His family has a website where, to this day, old friends and relatives stop by to be reminded of him and to fondly recall some amusing story or to keep him and his family updated on the latest info. I am sure I will check in from time to time, just as they do, to remember this handsome, strapping, young lad who had a twinkle in his eye, a pint in his hand, and a ready story on his lips.

I admit that I still have much to learn about "Mikey," but I have gleaned from him a renewed appreciation of family and friends, and that with a little laughter and alot of joy, we can all make a difference in other people's lives - in ways great and small.

Don't grieve for me, for now I'm free

I follow the plan God laid for me.
I saw His face, I heard His call,
I took His hand and left it all...
I could not stay another day,
To love, to laugh, to work or play;
Tasks left undone must stay that way.
And if my parting has left a void,
Then fill it with remembered joy.
A friendship shared, a laugh, a kiss...
Ah yes, these things I, too, shall miss.
My life's been full, I've savoured much:
Good times, good friends, a loved-one's touch.
Perhaps my time seemed all too brief—
Don't shorten yours with undue grief.
Be not burdened with tears of sorrow,
Enjoy the sunshine of the morrow.

Rest in peace, Michael Horn, and give God's ear a rest every now and again. I think his sides hurt from laughing.

To read more tributes to others:
The 2996 Project

Comments:
I came across this and was truly moved to tears. It's as if you really knew him. Mike is missed by so many, and things like this keep his memory alive for all of us. Thank you so much. -- Maureen Horn

I am a native Atlantan now residing in Snellville, where Everybody's Somebody.